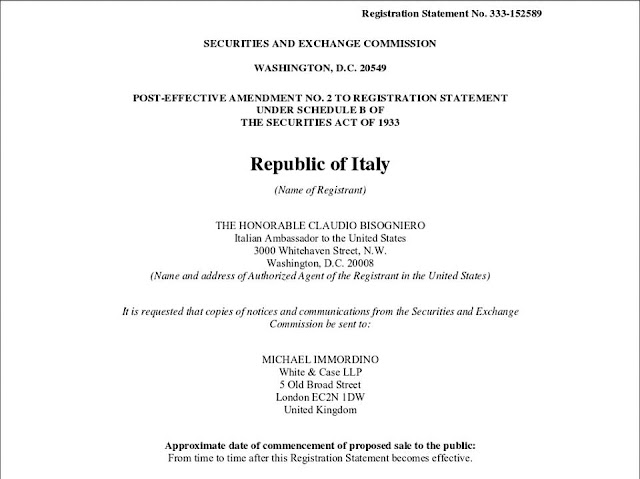 “...... Italy will irrevocably submit to the jurisdiction of the Federal and State courts in The City of New York and will irrevocably waive any immunity from the jurisdiction of such courts , to the extent permitted by Italian law, but not execution, attachment or process in the nature thereof. Italy will waive any objection to venue, in connection with any action arising out of or based upon the debt securities or the warrants brought by any holder of debt securities or warrants. Italy reserves the right to plead sovereign immunity under the United States Foreign Sovereign Immunities Act of 1976 with respect to actions brought against it under United States Federal securities laws or any state securities laws. In the absence of a waiver of immunity by Italy with respect to these actions, it would not be possible to obtain a United States judgment in such an action against Italy unless a court were to determine that Italy is not entitled under the Immunities Act to sovereign immunity with respect to such action. Enforceability in Italy of final judgments of U.S. courts obtained in actions based on the civil liability provisions of the U.S. federal securities laws is subject, among other things, to the absence of a conflicting final judgment by an Italian court or of a previously instituted action pending in Italy among the same parties and arising from the same facts and circumstances and to the Italian courts’ determination that the U.S. courts had jurisdiction, that process was appropriately served on the defendant, and that enforcement would not violate Italian public policy. In general, the enforceability in Italy of final judgments of U.S. courts obtained would not require retrial in Italy. In origin all actions brought before Italian courts, there is doubt as to the enforceability of liabilities based on the U.S. federal securities laws. The Italian courts may enter and enforce judgments in foreign currencies. “
Libertà
Pubblicato da alessandro a 08:01